What is Criminal Fraud? 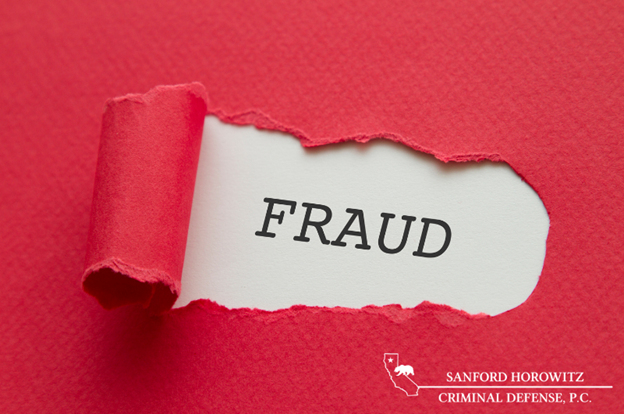 In California, there are several types of criminal fraud, and they are defined in several parts of the state code. Typically, they include a false statement (misrepresentation or lie) coupled with intent for financial gain (e.g. for the purpose of obtaining money, goods, services, or anything else of value). Fraud can include credit card fraud, forgery, healthcare fraud, identity theft, internet fraud, insurance fraud, mail fraud (federal), real estate fraud, securities fraud, senior citizen fraud, welfare fraud, and workers’ comp. fraud. Depending on the type of fraud and the amount of money involved, it can be a misdemeanor or felony. Credit card fraud, for example, is set out in California Penal Code section 484g. It is a wobbler, meaning that it can be filed as a misdemeanor or a felony (if the amount illegally obtained is over $950 in any consecutive six-month period or a firearm is involved).

Elements of Fraud Required for Conviction

Different fraud crimes will have different elements that must be proven beyond a reasonable doubt for you to be successfully prosecuted. If the prosecutor cannot prove all the elements, the jury should find you not guilty. Some of the standard elements include knowingly making a false statement (claiming a credit card, when you’re not an authorized user), intentionally deceiving a victim, who believed your statement, and damage to the victim including loss of money, goods, or something of value (some types of fraud do not require the loss to literally occur).

Defense 1. If there was not an intentional misrepresentation, there is no fraud. So, if you in good faith believed that you had access to the credit card or believed that the damage from the auto collision was covered by the insurance, then you have a defense against fraud. Of course, the finder of fact will have to believe you and will examine facts that bear on the veracity of your statement.

Defense 2. In some cases, if the victim was not deceived by the false statement, there cannot be fraud. This by definition is unusual because if the victim did not believe the statement, he probably would not have released to the defendant the money, goods or services that were requested.

Defense 3. There was no value to the goods obtained. If there is no damage, there is a good argument that there was no fraud.

For many of the types of fraud mentioned, the penalties will be those that accompany misdemeanor and felony theft. Your criminal record, if you have one, will also be considered when the prosecutor makes an offer to resolve the case or when the judge sentences you. The more crimes against property and general crimes on your rap sheet, the more serious the penalty is likely to be. For misdemeanor theft, the maximum punishments available include a fine of up to $1,000 and a sentence of incarceration in the county jail of up to six months. The judge or prosecutor can choose fines or jail time, depending on the severity of the offense and your criminal record. If you are convicted of felony fraud, your prison sentence can be as long as three years, under certain circumstances.

Experienced criminal defense attorney Sanford Horowitz will help you understand the charges you are facing, as well as what your rights are under the law. Sanford will fight vigorously for a positive outcome for your case before charges are filed, during pretrial settlement negotiations, or at trial. If you’d like to schedule a consultation about your case, call 805-452-7214 or fill out this contact form.